At this location I had the chance to speak to the French gentleman, in fluent English ,wearing a green fleece at the end of this folder in photo 29 & 30, talking to Arthur Gough & Richard Fox.  He told me he was 7yrs old when Vernon was liberated and his parents took him to see the German gun sited on the cliffs on the opposite side of the river. Time being short as we had to follow the procession to the bridge monument, I could not carry on the talk we had earlier. SO , Sir, if you read this please get in touch!!

PRICES FOR PHOTOS ON PRICES PAGE

1
View from coach window coming back to Vernon from Vernonnet.

2
Monument to the British Forces. 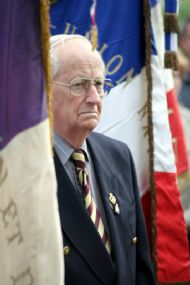 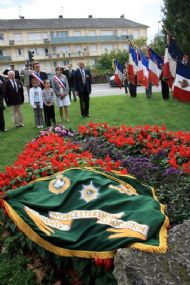 24
French inscription on The British Monument 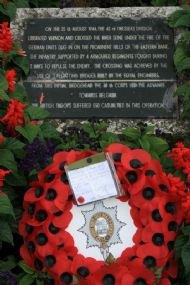 25
Inscription in English with wreath placed by Arthur Gough.

31
Sebastian, from the photos at the Tilly road memorial, Has shown Arthur this photo of the bridge put up by the Engineers directly across river behind photo. The photo shows repairs being made after the bridge was hit by a German mortar round. Sebastian has a folder of photos , So Sebastian, please get in touch!!

32
Back of photo of blown bridge.