It is hard to exaggerate the importance of the Battle of Gheluvelt, that took place on the 31st October 1914,

outside the city of Ypres in Belgium. Field Marshal Sir John French, who was commanding the British

Expeditionary Force (BEF) at the time, said that "on that day, the 2nd Worcesters saved the British Empire."

The action at Gheluvelt was part of the much larger First Battle of Ypres, where the outnumbered and

and sweeping through to the channel ports. Had they succeeded, the British Army could have found itself

involved in a Dunkirk-style evacuation, a quarter of a century before the actual one.

On the 31 October, around midday, the British line finally broke at Gheluvelt, and the Germans were poised

to make the breakthrough that could have won them the war. The only British reserves available were 364

men of the 2nd Battalion of the Worcestershire Regiment, who were sheltering nearby in Polygon

Wood. Led by Major Edward Hankey, they mounted a bayonet charge, through heavy artillery and machine

gun fire, and drove more than 1,000 German troops out of the grounds of Gheluvelt chateau, and the

surrounding area. They managed to 'plug' the hole in the British line, and save the day for the BEF, but not

without the sacrifice of 187 soldiers who were killed or wounded in the counter attack. A famous painting of

Major Hankey and his troops in the grounds of the chateau hangs in Worcester Museum and Art Gallery.

Please visit this link for a very detailed description on the Battle www.worcestershireregiment.com

The day's fighting had cost the 2nd Worcestershire a third of the Battalion's remaining strength, for 187 of

all ranks had been killed or wounded: “Let it never be forgotten that the true glory of the ﬁght at Gheluvelt

undaunted amid all the evidence of retreat and disaster to meet great odds in a battle apparently lost”. Field

The foundation stone for Gheluvelt Park was laid on 16 January 1919 by Field Marshal Sir William Robertson.

The bungalows within the park, built to provide homes for retired and disabled servicemen, were officially

The park itself, with its distinctive bandstand in the middle of a small lake, was opened on 17 June 1922 by

Field Marshal John French, who was by then the Earl of Ypres. As well as the modern Gheluvelt “interpretative

feature” (see below) the park has a memorial archway, near the junction of the Ombersley and Drotwich roads

- a plaque on the archway reads:

"City of Worcester homes for disabled sailors and soldiers. The houses that form the central block of

these homes were erected to commemorate the Battle of Gheluvelt, in which the Worcestershire Regiment

Gheluvelt Park was originally named Barbourne Park, after the area to which it belongs. The park was named

in honour of the Worcestershire Regiment and was opened by Field Marshal John French, 1st Earl of Ypres

on the 17th June 1922 to commemorate the Regiment’s part in the battle.  Gheluvelt Riverside

Conservation Area was previously the site of Barbourne water processing works. It was decommissioned in

1999. The land was purchased by Worcester City Council to allow the extension of the park up to the

River Severn. The style of the park differs from that of ‘old’ Gheluvelt, which is formal Victorian; the new

section of park is laid out as informal un-improved pasture and lawns. The modern Gheluvelt Park

(including the Conservation Area) is a 7.62 hectare (18.829 acres) free to access Public Park situated to

the northwest of the City of Worcester, which is owned and managed by Worcester City Council. The park

forms an important link in a much wider chain of parks, walks and green spaces within the city. A very popular

city park much loved by local residents, it also attracts visitors from across the City and further afield and

Sir Arthur Carlton was Mayor of Worcester during WW1. As Alderman Carlton, he was Chairman of the

Committee for the building of the park and houses. He was the manager of the Theatre Royal in Worcester

within it. After he lost his son at Gallipoli, he raised money to purchase a tank, ‘Cynthia Carlton’, which was

driven through the streets of Worcester and after the war it was returned to the City. His son, Laurence

Carlton, is remembered in a window in the cloisters of Worcester Cathedral. Alderman Carlton`s name was

put on the Foundation Stone of the first house near the main gates when building started in 1919.

known as Haig Homes, was established as a Charitable Trust in 1929 as a memorial to Field Marshal Earl Haig

their families. He was particularly concerned with the plight of those disabled during their service in

theatres of war and the difficulties created by this in their civilian lives. The object of the Trust is to provide

housing assistance to ex-Service people and/or their dependants. Currently this object is achieved by letting

homes at affordable rents. To be considered for housing, applicants must have a British Armed Forces

connection and be in housing need. The Association has over 1,300 houses, flats, maisonettes and bungalows throughout the UK.

The sculpture honours the men who fought at the Battle of Gheluvelt in 1914. Opened in 2010 this

modern work is a striking focal point of Gheluvelt Park, designed by London-based architects Plincke and

funded by a Heritage Lottery Fund grant, and is made from corten steel panels, concrete and granite. Every

element of the sculpture has a meaning. Each panel represents a battle of the First World War, with the

varying heights reflecting the number of casualties, while granite setts symbolise the Worcestershire

soldiers who fought in the Battle of Gheluvelt. The sixth panel explains the Worcestershire Regiment’s role

in the Great War and in late summer swathes of poppies, the poignant symbol of the First World War

battlefields, grow in the middle of the semi-circular sculpture. Keith Hall, project manager for the work,

said: “We hope it will teach or remind people what the name Gheluvelt means. It’s a physical structure giving a

solidity to what Gheluvelt Park is – a memorial. ” As well as being a focal point for the park, the memorial will act

as an open-air classroom for schoolchildren to learn about the battle.

Branch / Association Members please be in place by 10:45hrs (on left as entered through main

gates. volunteers will also be needed for other duties before, during and after, meet and greet etc)

Memorial to the Worcestershire Regiment A new Memorial Stone of Malvern granite, dedicated to all

ranks of the Worcestershire Regiment, will be unveiled by Mrs Julia Brotherton, granddaughter of Major

Hankey. The memorial commemorates those who served in the Worcestershire Regiment prior to the

to explain the significance of the Battle, to act as a Memorial to the Gheluvelt fallen and to commemorate

other battles of the Regiment. This will be the venue for the second part of the Centenary Commemoration,

consisting of a service and wreath laying and should conclude at approximately 12.30 p.m.

Displays and Stalls After the wreath laying there will be an opportunity to visit various displays from City,

County and veterans’ organisations and the Mercian Regiment.

Disabled can be dropped off at main gates , Barbourne Rd, If self driven the official car park is at

the north end of Pitchcroft Racecourse approached via Waterworks Road WR1 3EZ. This is approximately an

800 metres walk to the Memorial Stone.

Note You are advised that this is an open air event with no cover in the event of inclement weather.

In 2012, preparations for the Centenary of the Great War were launched at the Guildhall Worcester. A suggestion box

was started for ideas to commemorate the 100th year since hostilities began. One idea that struck a chord with

members of Worcester Branch WFRA was for a Regimental Memorial to All Ranks of the Worcestershire Regiment, in the

County City of Worcestershire. Gheluvelt Park was chosen as an ideal site, a boulder of Malvern Granite has been selected

and installed. In addition to St George`s Chapel in Worcester Cathedral, old Soldiers will now have a site where the service

of the Regiment, at home and overseas, is remembered.In tribute to Major Hankey`s leadership at the Battle of

Gheluvelt, his Grandaughter, Mrs Julia Brotherton has been invited to unveil the Worcestershire Regiment Memorial Stone.

The new Memorial Stone to all Ranks of the Worcestershire Regiment was made possible with the help of the following:

donation of the Stone.

Mr Barry Dinsdale, For removing the stone from the Quarry at North Malvern to Callow End.

Mr Steve Allard, Stonemason, for the inscription of the stone.

Gheluvelt Park Staff for digging out of plot.

Jewsons of Diglis Worcester, For use of lorry and crane to position stone.

Mr Damien McAvoy. Of Bradford Building Supplies, Malvern. For the donation of the blue bricks and sand.

Mr Mark Underwood of Underwoods Steel Stockholders of Hereford, for donation of Bars.

Mr David Nesbitt, of Malvern, for drilling of posts.

President and Committee of Worcester Branch for organising the project.

Donations towards costs of Memorial Stone were kindly given by.

The 31st of October 2014 has been organised by the President and Committee of Worcester Branch W.F.R.A.

Events in the Park

The Service will commence with the firing of an artillery piece and will consist of Dignitaries of Worcestershire,

Guests. Music will be provided by The Royal Logistics Corps Band. During the Service and Dedication of the

will lead down to the Interpretative Feature, Where there will be a short service and wreath laying.

There will be music in the park from Royal Logistic Corps Band. Static displays. Marquees with

displays. Stalls and food stalls, In the Council work area near the Sons of Rest Pavillion, Dave Cotterill will have

his pig roast doing pork rolls for £1. to those in Regimental ties / uniform. There is also the Pump

House Cafe in the park. Within the outside area of the park there are shops and pubs where refreshments can

also be bought. Afterwards the Royal British Legion at Claines will be open for drinks.

Map and images at bottom of page, more images to follow soon. 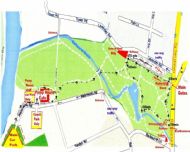 If you require the map larger, please contact through 'Feedback' page and I will email map to you. 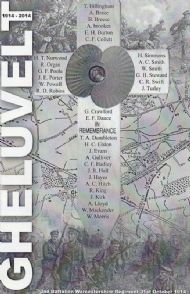 5
6
Gheluvelt 50th Anniversary 7th Btt Worcestershire Regt. March past Guild Hall Worcester
7
Gheluvelt 50th Anniversary. Veterans march past the Guildhall worcester
8
Main Gates to Gheluvelt Park, Barbourne Road, Worcester
9
10
Plaques on pillars of main gates
11
12
13
Plaque on right as entered through main gates at top of a few steps.
Notice the date?
14
15
The row of homes originally for the use of disabled Sailors and Soldiers

16
The Foundation Stone, on first house on right

17
One of the houses with the rendered name Gheluvelt 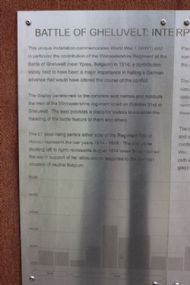 25
Information panels about the Feature 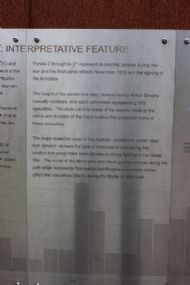 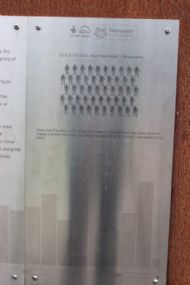 42
Dave Plant sets the Memorial Stone in a concrete mix then finishes with gravel to match the existing pathways
43
19th March
44
16th April 2014. Dave Plant returns to fix in the posts and rails
45
16th April, Dave with with his nearly finished work

46
Dave Plant returned a few days later to apply stain to the posts. The Park Staff has done a great job with the planting behind the Memorial Stone