After the previous day annual parades of  the 26th of August where the people of Vernon and surrounding areas pay their respect, by holding ceremonies at the monuments to the resistance and memorials to the British soldiers. We went back at a more leisurely pace. We started at the ` Layby` as the locals call it, on the Tilly road out of Vernonnet. We took in the peaceful calm of the area and what Arthur Gough said of his experiences there. At one point in August 1944 the 1st had a forward HQ and first aid post here.  Arthur led the way up the steep road away from the Malvern stone monument. Looking for the place near the road where he spent one of the nights in August `44` defending the area. He spoke of how it had rained all night and of how the water had come down the hill, washing over him and filling the ditch. On the left of the road the terrain fell off steeply and on the right it was a steep rise having large boulders and being heavily wooded, a Very tough place to attack against.  PhotosTi-T13. We were going to have lunch at this location until a sudden downpour of rain forced us into the cars and onto the Cemetery at Vernonnet.

At we had the chance to pay our respects at the graves of the French War dead from the 1914-18 war. We tidied up the graves of the and the men attached, by removing the old poppy crosses and straightening the bouquets. Arthur told us of how Sgt Hockley and Pte. Grainger were either side of him when they were killed and a few days after the battle when the bodies were recovered,  these two were missing. Arthur led the pioneers by motorbike to the place where they were. Arthur spoke of how he will never forget that Sgt. Hockley was still in the same position on his knees, as he was when he was killed. It was a very emotional time for Arthur, and he laid an extra cross each at these two graves. Photos VC1-VC16.  We had lunch under umbrellas and in cars as the heavens opened up again and then when the sun re appeared we took a short stroll to a Tabac for a drink.

Arthur wanted to visit a chateau where in 1944 he and some mates were invited by the then owners children to a meal with the family, the Chateau was then used as a short rest area. Arthur re visited the Chateau 10 years ago with Richard Fox and they were inside the gates when the owner appeared from his jogging session, after telling him that Arthur was there in `44`  they were invited in for a look around. Arthur Posed inside the gates for some photos and then decided to walk up to somebody who we thought were the owners, but it was a gathering of a large French family that had rented it for the day. Arthur had got talking to a young lady who spoke fluent English and invited him to go inside for a look around, we went inside but only as far as the foyer as there was the rest of the large family behind some glass doors enjoying a great looking feast. After some more photos outside where the river runs not too far away we walked back to the entrance and the cars. On the way we could see the stable block where Arthur was billeted and has some photos at home of him there with some bren carriers. Photos C1-C14.

Sunday 28th August. We decided to call into to have another look at the grave of Pte. Treadgold, We done the same as at Vernonnet by getting the crosses central etc. After, we had a walk to the and graves, which was very interesting.  We paid our respects, with Harry Massam placing a poppy cross at one of the monuments. Just at the end of our walk around this part of the cemetery we came across the lone grave of a Pte. Cosnell of the east Surrey Regiment, with the date of 3rd September 1914. A poppy cross was duly laid at his grave.  Photos VTC1-VTC 14.

After the Cemetery we travelled across the river to the remains of the old bridge with the Mill House perched at the end. Also near the bridge is the keep of an old castle.

We crossed the Pont Clemenceau back to the Vernon side of the Seine to Pienthievre Quay to have a closer look at the memorial to the British 43rd Division memorial and the one to the Nottinghamshire Sherwood Rangers Yeomanry Armoured Corps. Photos, PQ1-PQ.10.  Poppy Crosses were laid at these memorials. We then enjoyed a picnic lunch on the bank of the River , followed by some more sight seeing.

PRICES FOR PHOTOS ON PRICES PAGE 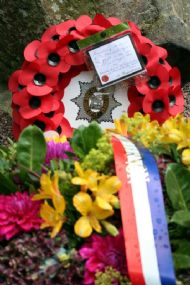 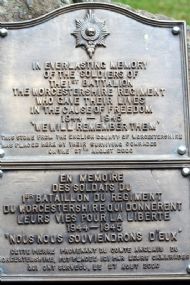 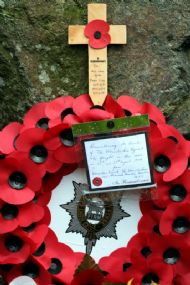 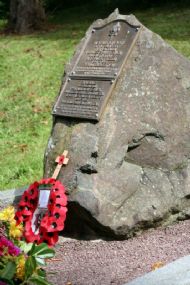 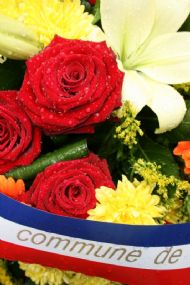 T.10
L>R.RICHARD FOX, ARTHUR GOUGH, OVER ARTHUR`S RIGHT SHOULDER IS JOHN WALTERS, BEHIND JOHN IS A TRACK THAT 10 YEARS EARLIER, ARTHUR TOOK RICHARD FOX UP THE HILL TO SHOW HIM WHERE THE TRENCHES WERE THAT ARTHUR HAD FOUGHT FROM.

T.12
A SPRIGHTLY ARTHUR LEADS THE WAY UP THE HILL TO FIND THE POSITION IN A DITCH THAT ARTHUR DEFENDED. WHEN HE WAS THERE IN 44 HE SAID THAT ONE OF HIS MEMORIES IS OF THE RAIN POURING DOWN AND THAT HE GOT COMPLETELY SOAKED BY THE WATER RUNNING DOWN THE HILL

T.13
L>R. ALLAN POYNER,JOHN WALTERS,ARTHUR GOUGH, MICK LEEMING. NEAR THE PLACE WHERE ARTHUR WAS LOOKING FOR. THE TERRAIN EITHER SIDE OF THE ROAD IS VERY STEEP ROCKY AND HEAVILY WOODED AS IT WAS IN 1944. PHOTO BY ALAN FISH

VC.6
ARTHUR GOUGH WRITING ON SOME CROSSES FOR SGT HOCKLEY AND PTE GRAINGER.

VC.8
ARTHUR GOUGH RELATING TO ALAN FISH HOW SGT HOCKLEY AND PTE GRAINGER DIED AND WHEN THE BODIES WERE RECOVERED 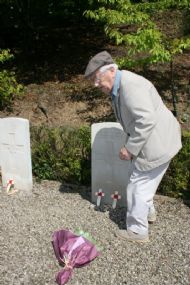 VC.11
WE NOW HAD TIME TO MAKE SURE EVERY GRAVE HAD A POPPY CROSS AND THAT THEY WERE NEAT AND TIDY WITH CROSSES CENTRAL AND BOUQUETS STRAIGHT 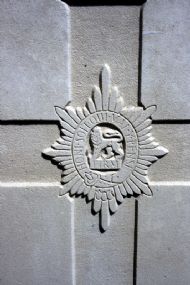 C.1
CHATEAU DE LA MADELEINE, ARTHUR WAS INVITED HERE FOR A MEAL BY THE OWNERS CHILDREN IN 1944, THE CHATEAU WAS USED AS A REST AREA FOR THE 1ST WORCESTERS.

C.2
ENGRAVING ON THE ENTRANCE PILLARS OF 17/02/41 W.E.G, WE THOUGHT IT WAS PROBABLY A GERMAN SOLDIER ON SENTRY DUTY AS THE 7 HAD HAS A LINE THROUGH IT 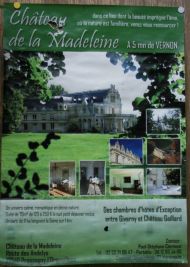 C.3
POSTER FOR THE CHATEAU, IT IS NOW LEASED OUT . ON THIS DAY A LARGE FRENCH FAMILY HAD RENTED IT FOR THE DAY FOR A FAMILY GET TOGETHER WITH A BUFFET.

C.5
ARTHUR AND RICHARD FOX INSPECT THE CHATEAU FROM NEAR THE ENTRANCE

C.7
ON THE LEFT OF THE PHOTO BEHIND RICHARD FOX IS THE STABLE BLOCK WHERE ARTHUR HAS PHOTOS FROM`44 OF HIMSELF AND A BREN CARRIER 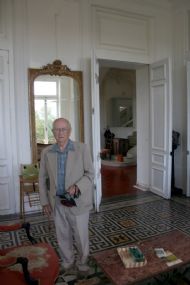 C.8
ARTHUR IN THE FOYER OF THE CHATEAU . HE HAD BRAVELY WALKED UP TO THE CHATEAU TO ASK IF HE COULD HAVE A LOOK ROUND . THIS IS WHEN WE FOUND OUT IT WAS A PARTY AND NOT THE OWNERS. A YOUNG LADY HE TALKED TO SPOKE FLUENT ENGLISH. 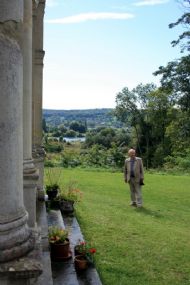 C.9
ARTHUR TO THE SIDE OF THE ENTRANCE WITH THE RIVER SEINE IN THE BACKGROUND 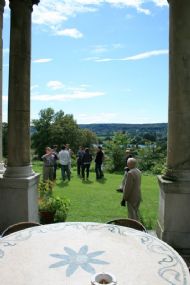 C.10
ARTHUR HAVING HIS PHOTO TAKEN THE GROUP OF PEOPLE IN THE BACKGROUND ARE FROM THE FAMILY PARTY 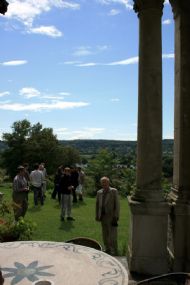 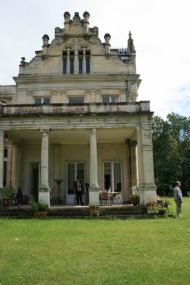 C.13
RF AND AG IN FRONT OF ENTRANCE 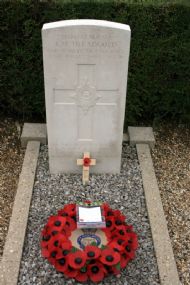 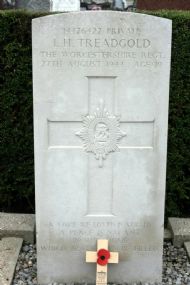 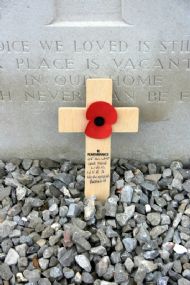 VTC.5
after a tidy up of the crosses and a straighten up of flowers, time to see the French war graves 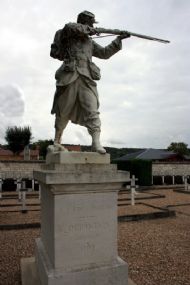 VTC.6
AFTER VISITING THE GRAVES FROM THE CEREMONY AND A TIDY UP OF THE CROSSES WE HAD A WANDER TO THE FRENCH MONUMENTS AND GRAVES 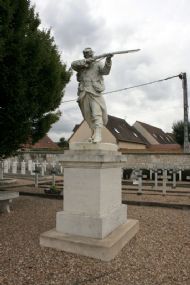 VTC.8
HARRY MASSAM LAYING A POPPY CROSS ON ONE OF THE FRENCH WAR DEADS MONUMENTS 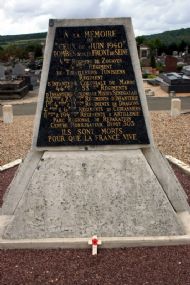 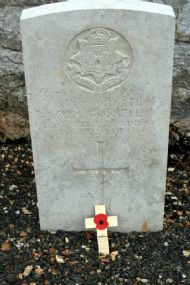 VTC.13
WE CAME ACROSS THIS GRAVE OF A PTE. A.H. COSNELL FROM THE EAST SURREY REGT. 3RD SEPTEMBER 1914. IN THE FRENCH SECTION OF THE CEMETERY, A CROSS WAS LAID

VTC.14
A FEW OF THE FRENCH GRAVES. 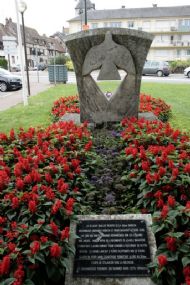 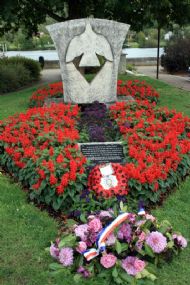 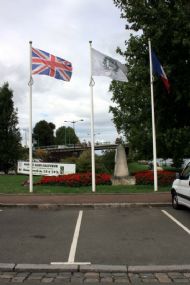 PQ.9
HEIGHTS ACROSS THE RIVER FROM WHERE THE GERMANS SHELLED VERNON AND BRIDGES